is honored with a Brick from Paul & Sheryl Davis 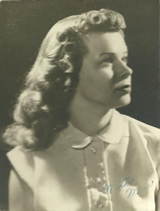 She's beautiful, isn't she. I certainly thought so when I was given the picture you see here. I was in second grade and I thought she was the most beautiful girl I had ever seen. I asked my mother to get the address for the Miss America Pageant so that I could send them her picture. I knew she was more beautiful than the girls we saw on television every year. Little did I know that this was her engagement picture. However, all was not lost. I was a flower girl in her wedding the next year. I had a yellow taffeta dress and a basket of rose petals that were to be strewn carefully down the aisle. I was in heaven – until she and John sneaked out the church window and left me with a hand full of sweaty rice.

As the years passed, I saw Nita Mae become a wife, mother, Girl Scout leader, church secretary, and moved from being the idol of a small girl to a cherished friend. When I got my first girdle and complained that it was too tight, she told me that we all must make sacrifices for beauty and that I should be sure to wear it with my skirts so they wouldn't get "butt sprung". When I had difficulty with my parents, she explained that our parents never thought about being our friends – they were our parents. She continued to explain life to me as I grew, and shared information about our families so that I could better understand circumstances as they arose. Every little girl should be so lucky to have a mentor to guide her through the tough years of growing up and becoming an adult..

When I finally became an adult, I realized that Nita Mae was not only the beautiful girl I had idolized, but was an incredible woman. She was funny; thanks to her, I have a complete set of eating utensils for 8 elves. Throughout her life, she always seemed to put others first, whether they were family, friends, or music students at WSU where she ended her working career. She was continually doing for others when she saw a need. Christmas Eve at the Mercer's was an event for those who had no one else. In later years, she was instrumental in adopting families in need at Christmas time rather than spending money on her daughter and herself, and allowing others to help as well. She was a caretaker, even when she was the one who needed care. During her illness, she apologized to callers when she didn't have the strength to chat, and always turned the conversation away from herself.

She didn't run a business, find a miracle cure, invent, or negotiate world peace. She was just a wonderful woman who had a positive influence on every one with whom she came in contact. There are a lot of people who are better for having known my heroine – Nita Mae Mercer.

A tribute to Nita Mae Mercer is located in section C10. She has been honored with a Brick.

Click on the Plaza image above to locate the Brick honoring Nita Mae Mercer .