is honored with a Brick from Alan Badgley 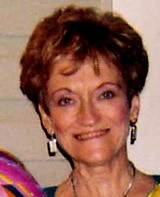 Sherry was born and raised in Fort Worth, Texas, prior to moving to Topeka, KS when she was 20 years old. As a graduate from Washburn University with a Bachelors Degree in Education, Sherry began her formal teaching career in Topeka. She went on to teach for a total of 15 years in Topeka, the Kansas City area and in Wichita.

Sherry has worked for the WSU Foundation since February 1990 and is currently the Scholarship Coordinator. Sherry strives to see that the guidelines for the various scholarships and fellowships are being followed according to the donor's desires. She is much the 'keeper of the gift'.

Sherry says teaching is her true life's passion. If you know Sherry, you would know this to be true, whether professionally as a fellow co-worker or as a friend.

Personally, Sherry is a wonderful friend, going beyond the close co-worker. When my life changed in a major way, Sherry was the first to lend a very real helping hand, not just the usual "I'll pray for you". Not demanding anything in return, Sherry does 'just what needs to be done'. She is a perfect example of the WIN method, 'What's Important Now'.

Sherry has one son, Shea, who lives in Mission, Kansas, a graduate at the University of Kansas. Whether as the sweet mother, expeditious co-worker, or giving friend, Sherry stays involved. As an officer in her own home owners association, she carries the same tenacity into her own community, as is evident at WSU.

Sherry has taught me several things about life, teaches much about scholarships, and continues to educate us on how to watch out for the student gaining the award. I consider Sherry a straight forward, no holds barred teacher that happens to work at the WSU Foundation. The winners are the students, the donors, the co-workers, and her friends, namely me. Sherry, thank you.

A tribute to Sherry Compton is located in section A04. She has been honored with a Brick.

Click on the Plaza image above to locate the Brick honoring Sherry Compton .