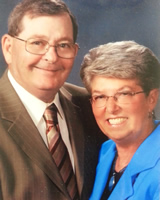 Carolyn Jean Barbour is honored as a strong, independent, and compassionate woman. She exemplified true hospitality, and she never knew a stranger.

Carolyn was born September 23, 1943, in Dodge City, Kansas, to Leonard and Ruby Dim Cox. Her outgoing personality ushered her teen years into whirlwind twirler excitement. Her happiness increased when she married the love of her life, Robert (Bob) Barbour, on August 28, 1965. Together, they raised three children, Jeff, Brad, and Lori. These children became the center of her universe and remained a source of joy to her for the remainder of her life enhancing it with the birth of seven grandchildren and three great-grandchildren.

Carolyn’s favorite holiday, Christmas, grew each year as she celebrated what she treasured most: her family and her dog, Maddie. However, Carolyn’s love for others did not stop with her family. Everyone who met her experienced her welcoming, kind heart. Her door would open, and another place would be set at the table, as her circle of friends continually grew.

Carolyn surrounded herself with the beauty of nature. As an avid gardener, the flowers that bloomed in her yard often graced her table. Her patio sang with chimes and birds. In this lovely setting, Carolyn lost her short battle with lung cancer on April 29, 2015, but her gracious spirit lives in the memories of all who came to know her, which is one of the many reasons Carolyn is a heroine.

A tribute to Carolyn Barbour is located in section C01. She has been honored with a Brick.

Click on the Plaza image above to locate the Brick honoring Carolyn Barbour.