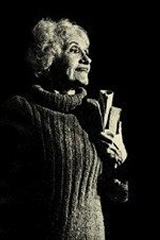 The name Mary Jane Teall has been synonymous with theater in Wichita for more than 70 years. She was the founder and artistic Director of the Wichita Community Theater, a professor and director at Wichita State University, and in 1981, she was inducted into the Kansas Theatre Hall of Fame. Retiring from WSU in 1982, as associate professor emeritus of speech communication and theatre, she would return to WSU each summer to direct the summer theatre program. In 1989 she resigned from Wichita Community Theatre. The little theatre at Century II was officially renamed The Mary Jane Teall Theatre in 1989. After her death, the Mary Jane Teall Awards were established in 1995 to recognize and honor Wichita theatres and artists for their excellence in memory of Mary Jane.

Born in Tekamah, Nebraska, Teall studied theatre at Northwestern University in Evanston, Illinois in the 1930s. In 1945, a single parent, she came to Wichita to lead a teen club for an organization called Community Chest. Soon after that, members of her church, the First Unitarian Church, persuaded Teall to direct one-act plays in what was called the "Unitarian Experimental Theater."

By 1946, the one-act plays had quickly evolved into the Wichita Community Theater. She has been widely credited with being the guiding light and driving force of the WCT for 43 years. Teall has acted, directed, sold tickets, collected and fabricated props, handled publicity, and dealt with budgetary problems. In addition with her involvement with the WCT, Teall also worked with Wichita State University where she taught, directed, and shared her expertise with students.

After 43 years as Artistic Director of the WCT, Teall resigned when a majority of the board passed a bylaw which stated that plays to be produced would be selected by a committee rather than the director.

As teacher and director at WSU her students fondly remember her pleasant demeanor and yet no nonsense approach to acting. Mary Jane made you THINK. Highly regarded for her directorial skills, her productions were always professional and well executed. Students, community and professional actors loved working in a Mary Jane show.

Teall died October 13, 1994, from injuries she suffered in an automobile accident on her way to Judge Riddel boys' ranch near Wichita to teach theater classes. Mary Jane’s legacy of theatre excellence will be remembered.

A tribute to Mary Jane Teall is located in section C10. She has been honored with a Large Paver.

Click on the Plaza image above to locate the Large Paver honoring Mary Jane Teall.