is honored with a Brick from Pablo Alvarez. 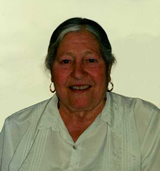 The daughter of Herminia Rodriquez and Faustino Alvarez, Maria Luisa was the eldest of four children. When she was a child, her father left for Argentina to provide for his family during Spain’s difficult times. Raised by only her mother and having to help care for her younger siblings. Maria Luisa learned at a young age the meaning of sacrifice and hard work.

Then, in the year 1936, the Spanish Civil War broke out when she was only thirteen years old. The war left deep impressions on her, having to witness atrocities during the three years it lasted.

Maria Luisa was a gregarious woman, full of life who enjoyed needlework and the company of her family and friends. She was an amazing storyteller and was loved by everyone that met her. The spirit and devotion of this strong woman encompasses well the essence of a heroine.

Maria Luisa passed away on October 8, 2009 in Oviedo, Spain.

A tribute to Maria Luisa Alvarez is located in section C08. She has been honored with a Brick.

Click on the Plaza image above to locate the Brick honoring Maria Luisa Alvarez .